Ford Foundation is one of the largest and most well-known charitable organizations in the United States, with a philanthropic history that stretches back more than eight decades. For an organization that is so entrenched in the public consciousness, the question then becomes: how do they attract fresh attention from younger groups of donors and activists alike? How do they reach beyond their usual network and patrons and gain fresh audiences? 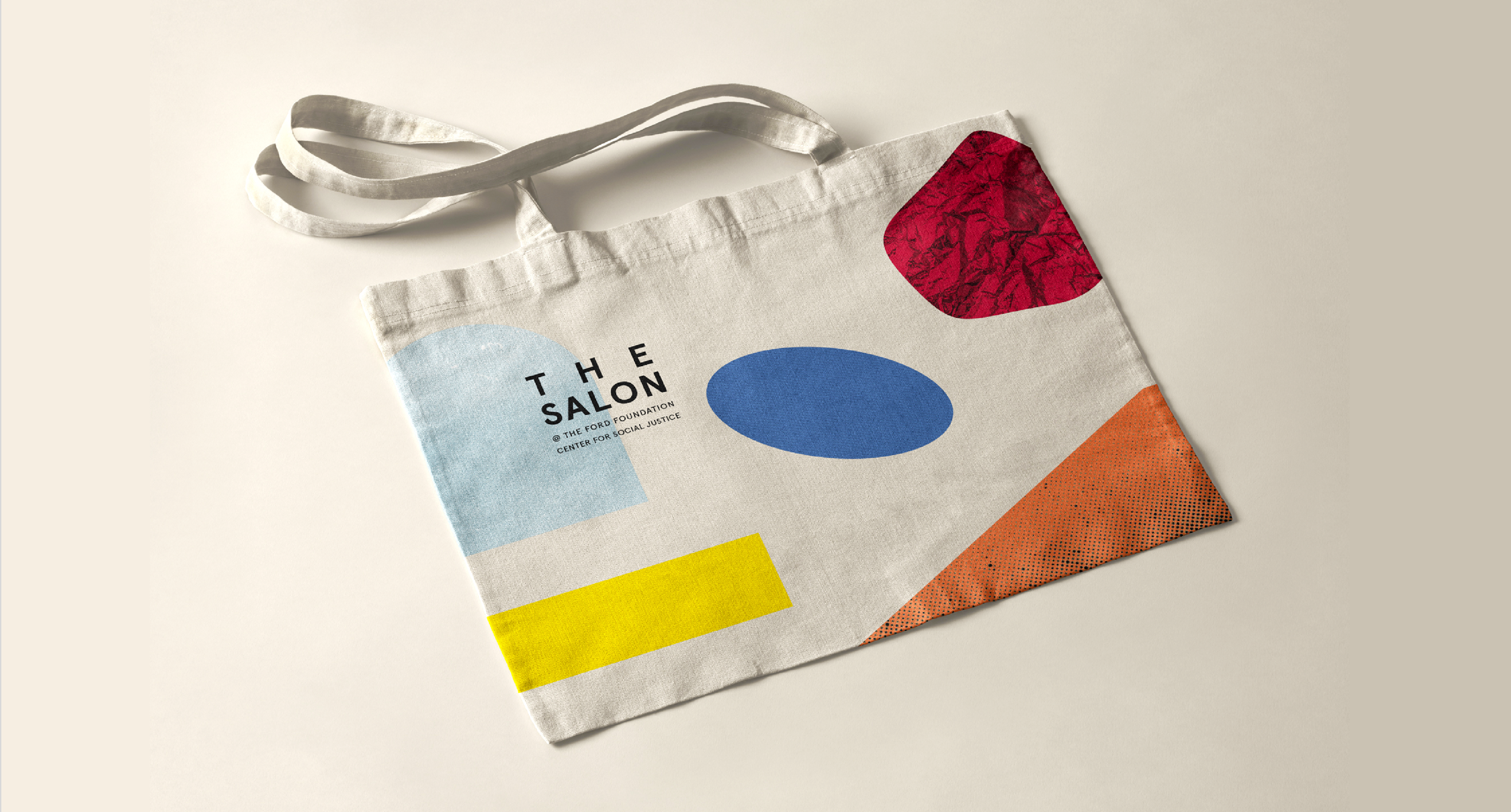 To answer these questions, Ford set out to develop an event series that brought together new and potential philanthropists to engage with each other, the pressing social justice and economic issues of the day, and the core mission of the Foundation. A combination of the desire to reach new audiences across the U.S. and globally and something called Covid-19 meant that Ford couldn’t rely on their usual and well-developed infrastructure to host the series—their New York City auditorium was shuttered and their in-house A/V team did not have the capability to collect and stream video content remotely, let alone from the multiple locations their speakers and presenters would need to be broadcasting from. Luckily, CMYK did have the capability, and The Salon was born. 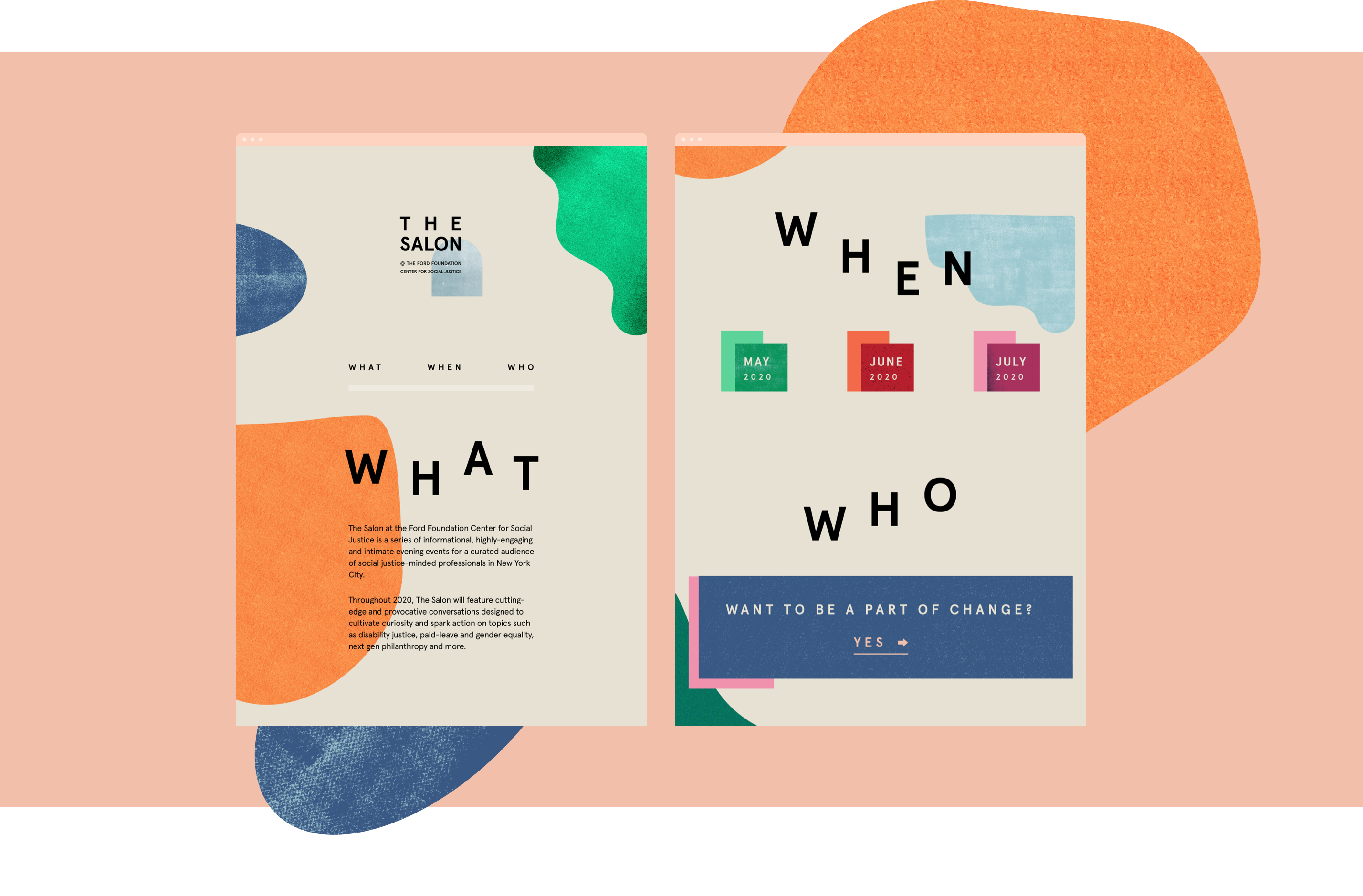 The Process and Solution

Beginning with only a core concept and set of audience goals, CMYK set out to design a holistic ecosystem of digital matter for The Salon, which included playful yet thoughtful brand identity, a feature-rich WordPress website that includes user registration and event RSVP systems, and a full collection of broadcast graphics, animations, and scripted video content. Paired with all of this was the powerful CMYKtv software, which allowed Ford to mimic the structure and engagement tools of an in-person event while also bringing together a group of speakers that would normally be difficult to collect in a single location and reaching an audience spread across the globe, from the U.S. to U.K., South Africa to Australia. Additionally, CMYK took ownership of all pre-production, production, and post-production duties for the event itself, including assembling and distributing camera kits for the four-event speakers, developing an in-depth run-of-show, producing intro and interstitial video content and assets, live switching and broadcast management during the event, and editing the event recording for wider distribution after the fact. With all technology and design details confidently in our hands, Ford was able to focus on the most important element for them: programming an impactful and diverse event! 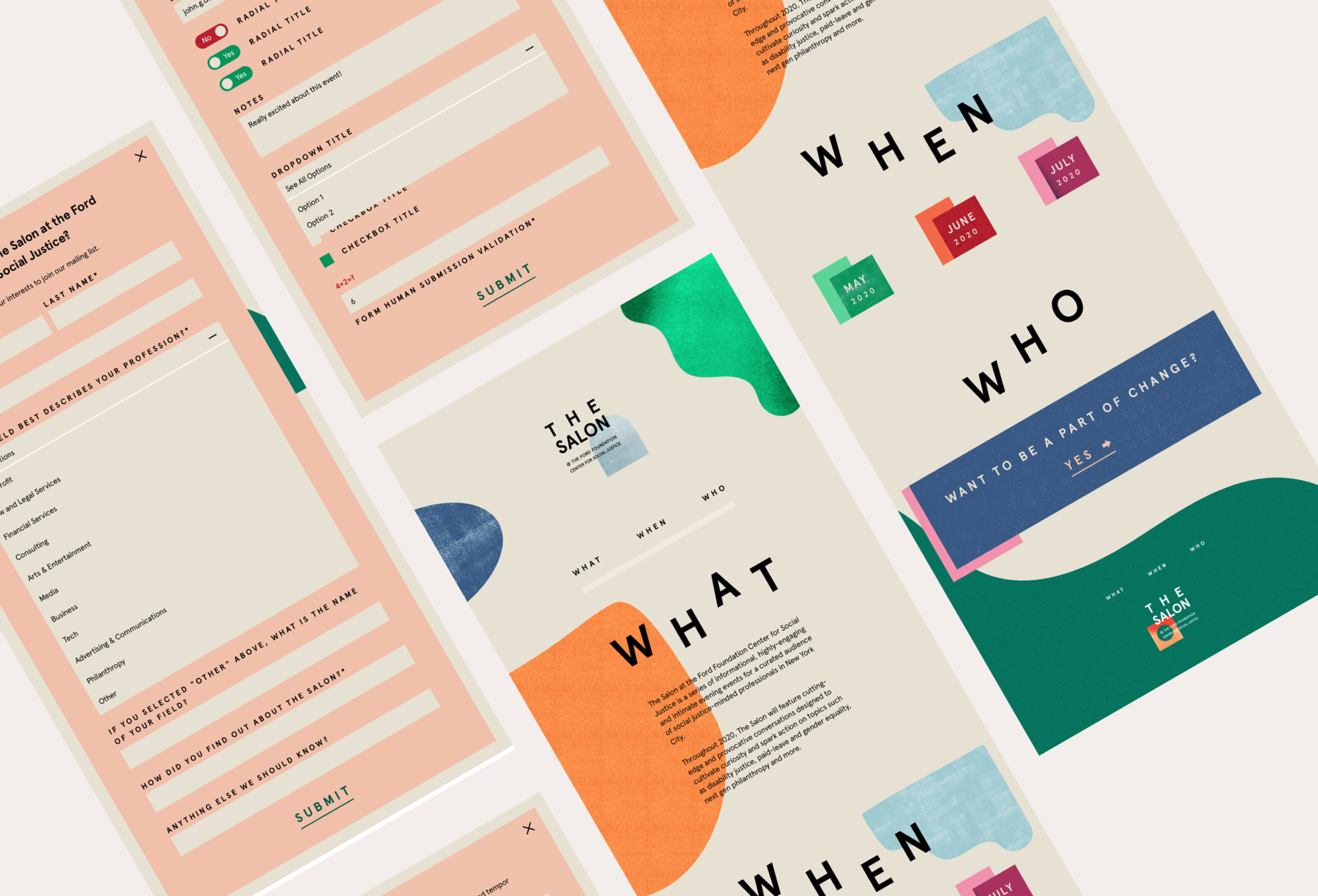 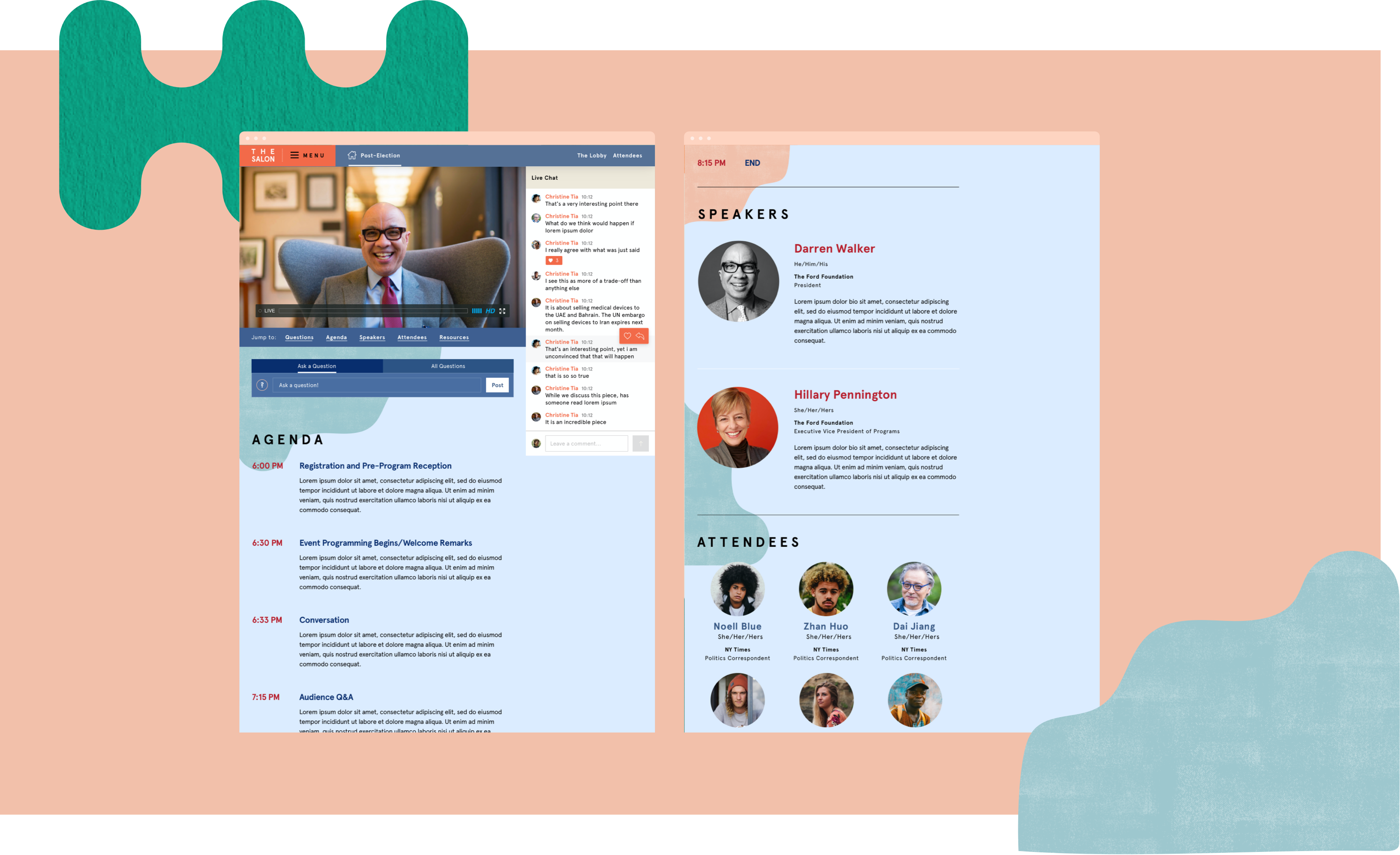 The Salon event, powered by CMYKtv, was a resounding success, receiving positive feedback from Ford, the event audience, and the speakers alike. Thanks to a robust analytics package built into the broadcast software and website, Ford was also able to capture invaluable information to inform programming decisions for the next events in the series, in addition to insight into audience behaviors and general user flow. Ford Foundation + CMYKtv = stunning design, thoughtful development, and smart production—it’s a beautiful thing! 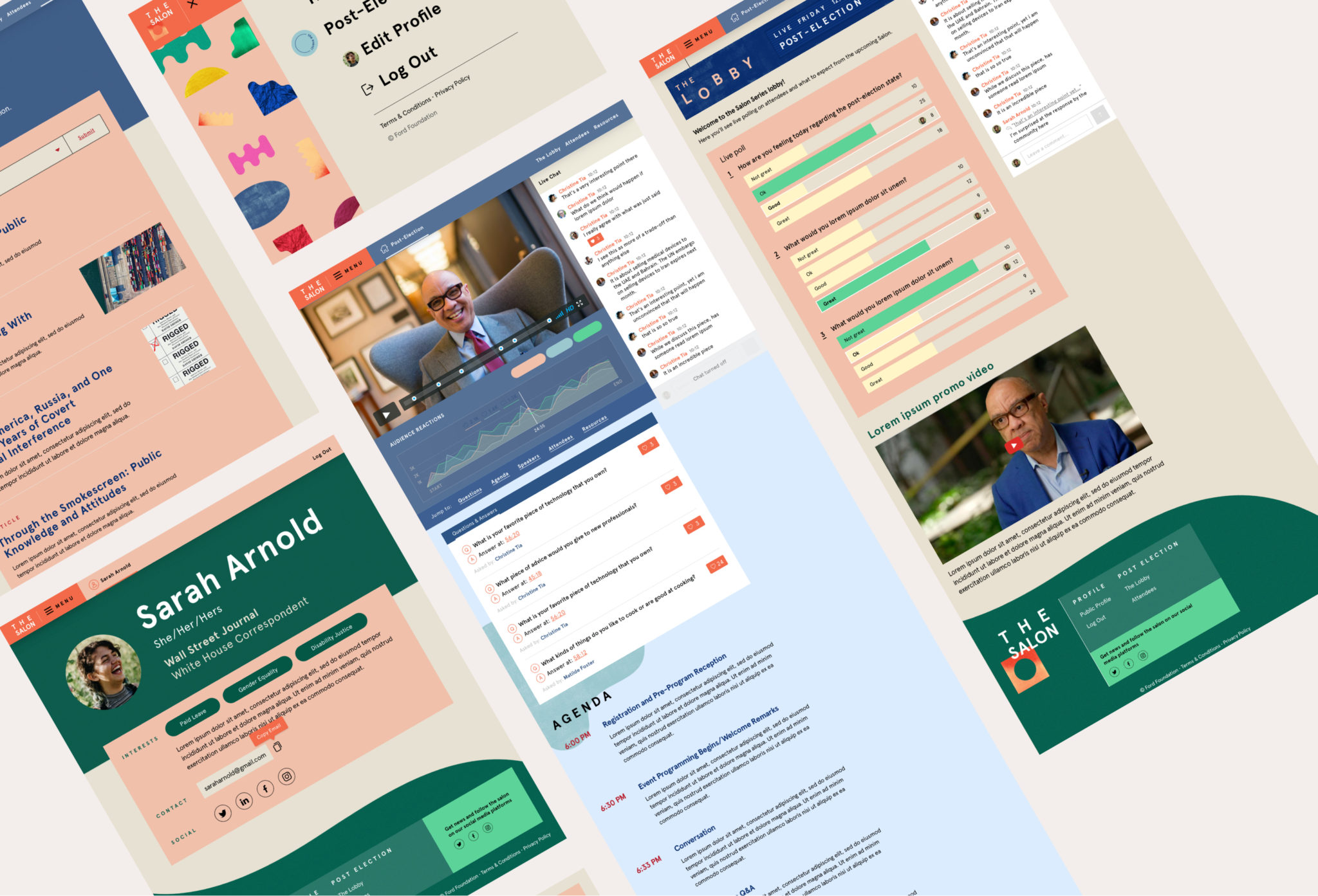